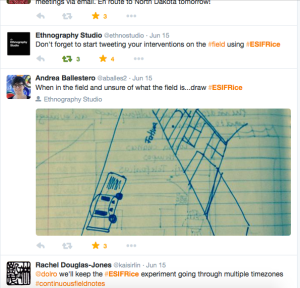 2, 2015, a group of us linked our fieldsites via twitter. The experiment titled “Ethnography Studio in the Field: #ESIFRice” was designed to open conversations about the relations between “field” research and the conceptualization of problems of inquiry. The purpose was to craft an experimental system (Rheinberger, 1997) with no predefined or anticipated outcome. And so it was, a group of us in different stages of our training, in different geographic sites, and from different professional locations, got together to think about the field.

For many of us, the experiment highlighted the need to carve a field out of an extremely dense and affectively charged (life)world. Those of us tweeting from the US had to grapple with news of more killings of black men and burned black churches. Death kept intruding into the analytic mood troubling the ease with which communities are sometimes turned into “research locations” or informants. Analogic sensorial and affective intrusions linked the US environment with different geographic locations: a green creek cutting a dry hill, an automated car surfing the carpet of the office where an interview took place, an invisible windshield framing the limits of a landscape inviting wayfaring, or in less poetic terms, interminable hours of driving. Cutting across and slicing through. The field was a bit choppy, no panoptic God trick, a fantastic display of methodological awareness of theoretical commitments.

When planning the experiment I was curious about the effect the “telegraphic” form of the tweet would have. Would it flatten sites? Implicitly, and largely because of the wording of the prompt, which read “Sometimes the field…”, there was an expansive tentativeness in thinking about the field. None of the participants used their tweets to illustrate location. All “the fields” were conceptual and existential configurations requiring a response from the anthropologist, despite her being a constitutive part of it. The explicit tentativeness of the physical and analytic configurations of the field underscored how fields are under permanent construction and continuous disassembling. In many circumstances ethnographers feel as if they have choices in setting those configurations, in many others we experience them as demands—political, affective, ethical.

Practically, one could speculate that the formal restrictions of the tweet were conducive to sharing this productive tentativeness. The character limit, in an interesting twist, had the effect of expanding field imaginaries. What remains to be seen is whether that amplification effect translates into more familiar anthropological formats: the book chapter, the research proposal or the journal article. With their comparatively longer forms, they could end up freezing and filling the porousness of these fields, objectifying geographic locations.

The experiment itself had the effect of constituting a field of its own, as Rachel Douglas-Jones noted. In a somewhat arbitrary way, just because we said we would, we closed the Studio in the Field experiment on June 22nd. We were left nostalgic, curious about where projects, but mostly our co-fieldworkers, were at. The experiment will be repeated, again, for the pleasure of doing so, and without the expectation of any product. Maybe we’ll report back then, but even better, maybe you’ll join us #ESIFRice.

In the Ethnography Studio class, we do an exercise in which we attempt to reformulate our research questions by designating one element the “figure” and the other “ground,” the idea being to deprivilege the very aspect of our project we think is most important; when you remove the “figure,” you can begin to see the “ground.”

When we began to design #ESIFRice, I felt that the most interesting piece of data would be the geotags collected from tweets from across the world. With tweets spanning continents and time zones, destabilizing my notions of the “field” seemed like it would happen naturally. While this was certainly a productive area of thought, the more I pondered, the more I realized that this notion was still grounded in the idea the “field” was a physical location, or in this case many physical locations. My own tweets during the experiment are very noticeably grounded on terra firma. This is partially because I had just arrived in Chile when the experiment began, and was living a more obviously physical definition of the “field” as I worked each day. Nonetheless, my preference for a physical, situated understanding of the “field” says as much about my own discomfort with thinking the “field” more conceptually as it does about my day-to-day life in Chile.

This realization was, for me, a turning point with #ESIFRice. I began to wonder if the physical attributes of the tweets and tweete 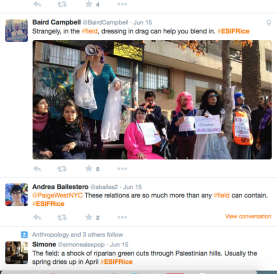 rs involved were really the most interesting point of analysis. In thinking of Twitter as a field, the answer seemed quite obviously to be “no.” When we go into a physical “field,” it’s not necessarily the words our interlocutors say, or the actions they undertake, that interest us the most. Were this the case, our books and articles would just be page after page of interesting vignettes. What interests us as ethnographers is the undergirding. What histories and experiences have converged to make an interlocutor choose one word over another? What moments have led someone to become an activist, a scientist, or a politician? Why do I think the field is one thing, my office mate another, and someone else—a continent away—yet another? #ESIFRice helped me ask these questions.

I was not initially sure what would become of #ESIFRice. I have often incorporated social media into my ethnographic research, but wondered how my relationship with Twitter might change if I stopped using it as a tool for fieldwork, and started viewing it instead as a field itself. Ultimately, this is my greatest takeaway from our weeklong experiment. Although I still view social media a key tool for conducting fieldwork, #ESIFRice has taught me that the same kind of ethnographic observations we make—and the interactions we have—in our physical “fields” are often reproduced in the tweets, retweets, and replies collected in a Twitter hashtag. Through #ESIFRice, I was able to deprivilege the physical “field,” and embrace the “field” as an idea; ground has become figure, and figure has become ground.

An “academic tweet”—whatever that means—is not just any tweet, sure. But still, it isn’t really in the same family as our term papers, conference papers, or even blog posts either. Effectively engaging with scholastic ideas on twitter doesn’t have to mean translating your argument for lay

people, nor is it really about creating the perfect arrangements of jargon words. It’s maybe a little poetics, and a lot of practice. Its about second-order organizing as much as developing your contingent musings. Its something learned and never simply prescribed.

Our experiment demonstrated there’s no single appropriate style to one’s anthropological twitter form; you can be reflective, quirky, and bold. Informational, descriptive, and unsentimental. You can have dialogues with interlocutors, colleagues, corporations, and god. Text, images, videos, selfies. Just don’t get combative, and stay away from the straw-people. Be wary of trolls, and conscious of the emotional risks possible on open online platforms.

I think our experiment also suggests that organized academic engagement with twitter can be generative in a couple senses. First, pedagogically, I believe organizing anthropologists around a certain goal such as “tweeting the field” is helpful to get people to practice using new digital technologies that often induce allergic reactions. Questions of style and rhetoric are addressed through this directed practice.

Secondly, organized ethnographic engagement with twitter suggests that such “digital scholarship” isn’t about advocating that you tweet your dissertation (please don’t!) nor does it equate retweets to citation counts on your CV. Organizing anthropological subjects on twitter is about having engaged public conversations not necessarily of the viral type. Such organized anthropologies on such a platform produce and reconfigures forms of data and communication within scholarly networks, systems, and energies. A pre-meditated and collaborative project, among other uses of twitter, thus might produce interesting results.

Twitter is not the fetish though. The interface is just one variable, one unique discursive tool provisionally available to us. An organized experiment like this requires more than twitter: face-to-face planning, emails, telecommunication, and post-experiment workshops are all part of it. There will be a better interface someday, but for now: organize, tweet, and repeat!