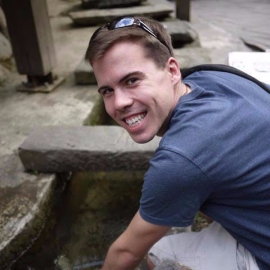 Tim is a third year Ph.D. student in the Anthropology department at Rice University. His dissertation research focuses on the social lives of HIV prophylactic drugs in and around Bangkok. He is interested in the ways in which the governance of substances intersects with the governance of subjectivity, as well as the ways in which subjects are experimenting with substances across different contexts of relation, intimacy, and care. With broader interests in the anthropology of pharmaceuticals, medical anthropology, STS, and queer theory, he is interested in the ways that queer subjects engage with chemical infrastructures of health, as well as the ways that substances are made, unmade, and remade across worlding projects at different scales.

Prior to his Ph.D. work at Rice, Tim spent four years living and working in Thailand and Taiwan, where he worked as an activist, researcher, and translator for several NGOs doing work within the realm of sexual health and sexual rights. He completed an M.A. in Anthropology at National Taiwan University in Taipei, where he conducted research on sexual politics in Taiwan and tongzhi activist engagements with debates on sovereignty, as well as national discourses of diversity/multiculturalism. He holds a dual B.A. from The George Washington University in International Development and Anthropology, with a minor in Chinese Language and Literature.

At Rice, he is a co-coordinator of The Ethnography Studio, along with Andrea Ballestero, Kristin Gupta, and Gebby Keny. He is also affiliated with the Center for the Study of Women, Gender, and Sexuality as a certificate student.